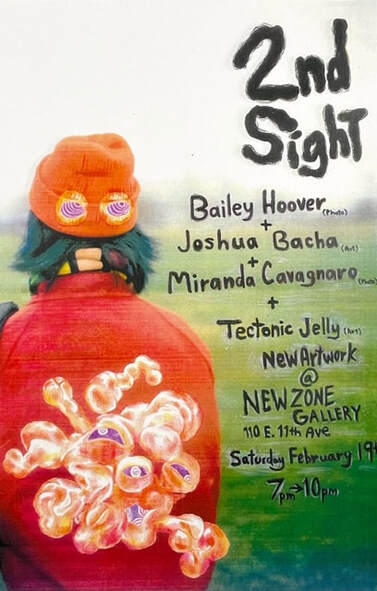 During the weekend of February 18th, 19th and 20th, New Zone Gallery, located at 110 E.11th Ave in Eugene will host a group exhibition of young local artists called, ”2nd Sight” in the Klausmeier Room:. A gallery reception hosted by artists, Miranda Cavagnaro, Aaron “Sully” Sullivan,  Bailey Hoover,  Joshua Bacha., with friends will be held on Saturday evening on February, 19th from 7-10pm.

Miranda Cavagnaro is a film photographer based in Eugene who has been working in the medium for 5 years.

Aaron “Sully” Sullivan is a multidisciplinary moss covered stone that masquerades as a human artist. Finding solace in putting all the anxieties and fears currently dwelling in his brain on paper. He has been sitting under fiddlehead ferns in Eugene doodling since 1985.

Bailey Hoover is a portrait photographer who currently resides in Eugene. Their work has an emphasis on emotional intensity, the subject's relationship with their environment, and sharp contrast in light and shadow.

Joshua Bacha is a visual artist currently living in Eugene. He's been pushing himself as a visual artist since 2016 and his forms are often vibrant, abstract or surreal. The majority of his current work is a combination of hand drawing with digital manipulation.
February 2018

This unique exhibit moves from the Klausmeier Room in January into the Sheffer Recital Hall of The John G. Shedd Institute Feb. 22 & 23. The exhibit is made in collaboration with singer Siri Vik and company’s performances of Weill and Brecht’s “The Seven Deadly Sins of the Petty Bourgeoisie” [original 1933 version].

The Shedd Institute will host an “art opening” with a cash bar prior to Vik’s first performance beginning Feb. 22, 6:00-7:20 pm, prior to the first performance. The art exhibition will continue to be open for sales during intermissions, and before and after each program on Feb. 22 and 23.

This event will be a uniquely cooperative blending of art, music, theater, and dance, with a subject as relevant to today’s lifestyles and politics as it was when the list of seven deadly sins first appeared in the 4th century. All 7 sins represent patterns of dysfunction within us that eventually lead to unhappiness or worse.

From Joseph Lieberman, the artist directing this special exhibit:
“Rather than being some anachronistic relic, I see the Seven Deadly Sins as a contemporary wake-up call relating to how individual choices, extremism in society, overconsumption, and the seductions of unrestricted excess can move us toward pathways of self-indulgent destruction, for ourselves and others. The Sins were not meant to be top-down commands that must be obeyed, but rather as guides to self-enlightenment through self-restraint. To balance the exhibit, we’re also showing interpretations of The Seven Heavenly Virtues.”

For more info about The Shedd Institute’s musical performance, go to their website at theshedd.org/home.aspx or call 541-434-7000 for tickets.

Also read this excellent article in the Jan. 3, 2019 Eugene Weekly.